Swiftcase started life in 2013 within the incubation space of Whitfield Business Hub, which allowed them to accelerate their start up growth.  As they expanded they moved to larger premises in Hoylake in 2015, then added a satellite office in Liverpool in 2018.  This office is based within the Baltic Triangle, an area which has attracted some of the most creative & tech savvy firms in Liverpool.  As a result they have recruited an incredible talent pool of developers & techies allowing Swiftcase to be an up & coming software firm to watch.

This year they have decided to move their entire operation to Liverpool, making the Baltic Triangle their new head quarters.  Managing Director Adam Sykes said “This is such a thriving area now, so a wonderful place for our team to develop and a fabulous place to bring clients.  It is a great platform for the continued expansion of the Swiftcase team.” 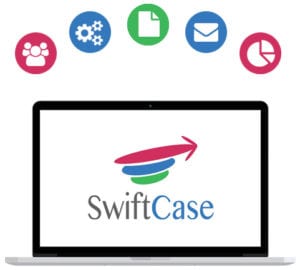 Kate from Whitfield said “It’s great to see the success & continued growth of one of our fledgling start-ups & hope they thrive in the Baltic Triangle.”

Swiftcase is a cloud-based platform for automating & organising a business, allowing optimisation of workflows & operations with extensively configurable workflows.